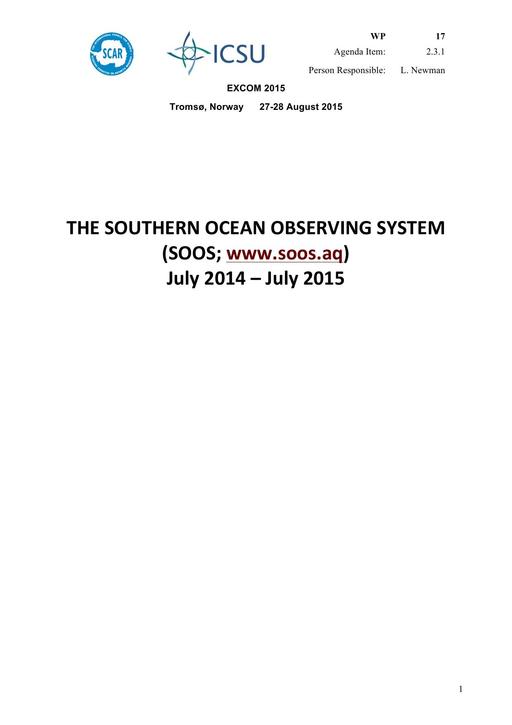 Introduction/ Background:
The Southern Ocean Observing System (SOOS) is a joint initiative of the Scientific Committee on Antarctic Research (SCAR) and the Scientific Committee on Oceanic Research (SCOR), and endorsed by the Partnership for Observations of the Global Ocean (POGO) and the Climate Variability and Predictability (CLIVAR) and Climate and Cryosphere (CliC) projects of the World Climate Research Programme. SOOS was launched in 2011 with the mission to facilitate the collection and delivery of essential observations on dynamics and change of Southern Ocean systems to all international stakeholders, through design, advocacy, and implementation of cost-effective observing and data delivery systems.

Recommendations/Actions and Justification
SCAR provides financial support for the annual SSC meeting (2016 meeting hosted by Scripps Institution of Oceanography, USA). This support is imperative to ensure participation of all international SSC members. SOOS greatly appreciates the support provided by SCAR, and requests that this support is continued for 2016.

SOOS also requests the attendance of the SCAR Executive Director at the upcoming SOOS SSC meeting in the USA.

Expected Benefits/Outcomes:
Continuation of the support for the SSC meeting will ensure participation by all SSC members, which is imperative for planning and implementation of SOOS objectives.

The SCAR Director has not yet attended a SOOS SSC meeting and with SOOS implementation bodies developing over the next year (Working Groups and Task Teams), it will be important to SCAR to have a solid understanding of what we are developing, to help avoid duplication and to help communication of what is going on in SOOS to the national committees and to the Antarctic Treaty.

Partners:
SCOR provides 10,000 USD towards the annual SOOS SSC meeting. Discussions will be had with the 2016 SSC meeting host, regarding a level of host support for this meeting.

The SCOR Director has attended three of the four SOOS SSC meetings, and has confirmed his likely attendance at the 2016 meeting.

Budget Implications:
10,000 USD are requested to support the 2015 SSC meeting

SCAR is asked to support the SCAR Director to attend out of the central SCAR budget, not the 10,000 USD requested for SSC participation.