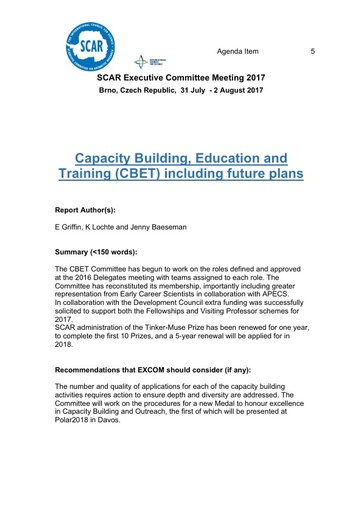 The CBET Committee has begun to work on the roles defined and approved at the 2016 Delegates meeting with teams assigned to each role. The Committee has reconstituted its membership, importantly including greater representation from Early Career Scientists in collaboration with APECS.

In collaboration with the Development Council extra funding was successfully solicited to support both the Fellowships and Visiting Professor schemes for 2017.
SCAR administration of the Tinker-Muse Prize has been renewed for one year, to complete the first 10 Prizes, and a 5-year renewal will be applied for in 2018.