SCAR XXVIII 18b: JCADM Proposal to COMNAP and SCAR Popular 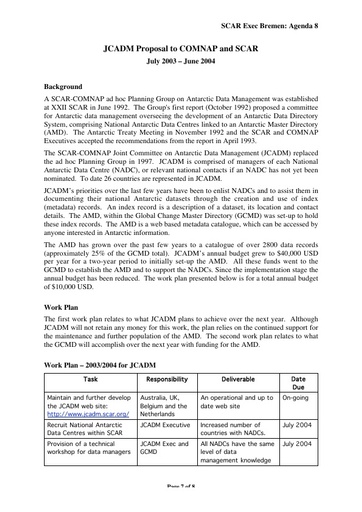 SCAR XXVIII 18b: JCADM Proposal to COMNAP and SCAR

A SCAR-COMNAP ad hoc Planning Group on Antarctic Data Management was established at XXII SCAR in June 1992. The Group's first report (October 1992) proposed a committee for Antarctic data management overseeing the development of an Antarctic Data Directory System, comprising National Antarctic Data Centres linked to an Antarctic Master Directory (AMD). The Antarctic Treaty Meeting in November 1992 and the SCAR and COMNAP Executives accepted the recommendations from the report in April 1993.

The SCAR-COMNAP Joint Committee on Antarctic Data Management (JCADM) replaced the ad hoc Planning Group in 1997. JCADM is comprised of managers of each National Antarctic Data Centre (NADC), or relevant national contacts if an NADC has not yet been nominated. To date 26 countries are represented in JCADM.

JCADM’s priorities over the last few years have been to enlist NADCs and to assist them in documenting their national Antarctic datasets through the creation and use of index (metadata) records. An index record is a description of a dataset, its location and contact details. The AMD, within the Global Change Master Directory (GCMD) was set-up to hold these index records. The AMD is a web based metadata catalogue, which can be accessed by anyone interested in Antarctic information.

The AMD has grown over the past few years to a catalogue of over 2800 data records (approximately 25% of the GCMD total). JCADM’s annual budget grew to $40,000 USD per year for a two-year period to initially set-up the AMD. All these funds went to the GCMD to establish the AMD and to support the NADCs. Since the implementation stage the annual budget has been reduced. The work plan presented in this paper is for a total annual budget of $10,000 USD.