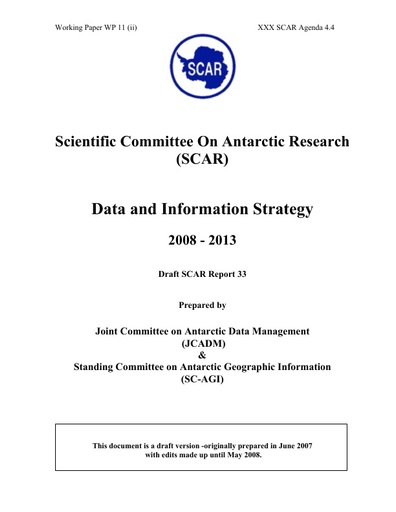 International, Antarctic-based research is loosely coordinated under the auspices of the Scientific Committee on Antarctic Research (SCAR), which is an inter-disciplinary committee of the International Council of Scientific Unions (ICSU). SCAR is governed by an Executive Committee, National Delegates and an Executive Director, and operates via Scientific Standing Groups. ICSU and the World Meteorological Organization (WMO) are responsible for coordinating the 2007-09 International Polar Year (IPY), a globally coordinated set of science projects with the capacity to significantly advance human understanding of earth systems. SCAR is contributing directly to the management of the IPY 2007-09, which is the fourth in a set of International Polar Years that began in 1882. Each International Polar Year left a global legacy. The third IPY became known as the International Geophysical Year (IGY) of 1957-58. One part of the legacy of the IGY was the creation of SCAR in 1958, to continue the coordination of Antarctic research begun during the IGY. Another part of the legacy of the IGY was the creation of the World Data Centre System. Post 2008 it is hoped that IPY will leave a series of long-lived, global observing systems capable of monitoring and detecting changes in the behaviour of the oceanic, atmospheric, cryospheric and biospheric elements of the overall Earth System. The need for such observatories has never been more important in the history of mankind given recent consensus on the existence of human-induced climate change and its potential impact on society and natural systems.

Sustained and effective global observing systems will be collaborative ventures shared by nations and under-pinned by professional data management, agreed data and information standards, and shared data and information infrastructure. This infrastructure will require planning, a coordinating framework, governance and appropriate resourcing. In addition to being able to draw upon national research programs, SCAR members are fortunate in having already put in place collectively some of the elements of the infrastructure required for supporting these sustainable observing systems.

In 1992 SCAR presented a proposal (No. WP5) at the Antarctic Treaty Consultative Meeting (ATCM XVII) for development of an Antarctic Data Management System which was agreed to by all Parties. By 1998 SCAR and the Council of Managers of National Antarctic Programs (COMNAP) reported to ATCM (XXII) that they had established a Joint Committee of Antarctic Data Managers (JCADM) to pursue development of the system. More recently a SCAR group of experts providing advice and services related to building an Antarctic Spatial Data Infrastructure (AntSDI) was elevated to become a SCAR Standing Group (the Standing Group on Antarctic Geographic Information – SC-AGI). JCADM has been in operation for over 10 years and has been successful in raising the profile of data management within the SCAR community, but its work to date has not been supported by a comprehensive Strategy that defines how an effective Antarctic Data Management System (ADMS) could be implemented. Similarly, SC-AGI has developed a range of quality products that could be used to build components of a spatial data infrastructure, but they are not in wide use within the Antarctic community and there is no roadmap detailing how an AntSDI could be developed. Recognising these deficiencies, the SCAR Executive called for JCADM to develop a SCAR Data and Information Strategy. In 2006 COMNAP, co-sponsor of JCADM, reported to the SCAR Executive Committee that it would be withdrawing financial support for JCADM activities in June 2008 stating that “The group now showed maturity and seemed to have reached the point where it could sustain itself”. Accordingly, from July 2008 JCADM will seek to become a Standing Committee of SCAR.

Theses pages describe a SCAR Data and Information Strategy. The Strategy recommends that the number and alignment of the current, loosely federated system of independently operating National Antarctic Data Centres (NADCs), be upgraded and augmented to create a sustainable and network-based infrastructure capable of meeting the data and information management challenges that accompany the technological advances which we now enjoy at the beginning of 21st Century. It also provides the larger and currently missing context for existing data and information bodies like JCADM and SC-AGI, each of which addresses a part of the overall picture – but currently in a relatively uncoordinated way. An important constraint applied throughout the Strategy is that a SCAR Antarctic Data Management System should be interoperable with other existing global infrastructures and initiatives, particularly with the reform of the ICSU World Data Centre System, and should leverage existing and emerging global standards and protocols wherever possible.

The Strategy indicates that several obstacles must be overcome to build a better data management capability in support of SCAR science. There are significant implications for both JCADM and SC-AGI.

Inadequate resourcing of the JCADM Executive and JCADM/SC-AGI activities severely limits the development of data and information management services for SCAR’s science. The Strategy recommends that:

To date SCAR data management has mainly been undertaken as the marginal cost of doing science. The task has been accomplished largely through voluntary labour provided by Members, particularly where shared infrastructure services have been developed. Many of the more mature national programs are now experiencing decreases in their program budgets making it difficult to continue substantive voluntary contributions that primarily support the common good, as opposed to national interests. A focus on national interests neglects the benefits that can accrue through taking a pan-Antarctic approach. Now is the time to start seeking external funding sources to support some of the key data management activities required to develop the pan-Antarctic Data Management System (ADMS) from which all Members should benefit. Section 5.4.2 makes this case and also posits that linking with a small number of well-resourced, emerging data networks would give SCAR a kick-start in terms of leveraging some existing core capability.

There is still a strong culture amongst scientists NOT to share data, despite Treaty Parties agreeing to make scientific data public under Article (III).(1).(c) of the Treaty. This culture is being reinforced by existing reward and recognition systems operating within national science programs. Section 5.3 discusses this issue and suggests that a recognised data citation system, that operates similarly to a publication citation system, could influence scientists to publish more data. The SCAR Executive, possibly through IPY activities, or in conjunction with an appropriate peak library or publication body, is in a position to explore the development of a SCAR data citation system that would encourage scientists to publish data by providing recognition.

The data products and services already developed by SC-AGI members at considerable cost and effort on the part of national contributors are not being effectively exploited. A closer partnership between SC-AGI members, who develop these products, and potential consumers, such as JCADM’s NADCs, should be formed to better utilise these tools. Such a partnership would provide an excellent mechanism for fine-tuning these tools to meet actual user needs and for weeding out developments that are not operationally robust or useful. The need for closer cooperation between these two SCAR groups is outlined in section 5.4.1.

The restricted nature of available resources to undertake development work related to building data systems will require an incremental approach to building an ADMS encompassing a Spatial Data Infrastructure (SDI). As core capability grows over time, more users and developers should be attracted to assist in growing the capability further because of the intrinsic rewards that are more likely to be obtainable from participating in the development of a functioning system. To start this approach, the Strategy suggests setting up a series of well-bounded pilot projects that could begin to build the necessary components of an ADMS, ideally centred around developing virtual observatories to support observing networks. Section 5.5 discusses this concept and provides examples of the types of activities that might be pursued.

Building the foundation data layers of the proposed AntSDI could be greatly facilitated by closer cooperation amongst those nations with an active national Antarctic mapping program. As a first step, obvious gaps in data availability should be identified and agreed upon. Secondly, forecasts of likely mapping activity by national programs should be sought to assess how these gaps might be best filled. SC-AGI members should be able to readily assist in these exercises given information that they already have at hand and because of their links into national mapping programs. Once this information is available, SC-AGI should provide advice to SCAR, on possible mechanisms to fill key gaps. This issue is also discussed in more detail in Section 5.5.

Capacity-building will be crucial to develop the work force and to spread the work-load, currently predominantly carried by the more mature SCAR contributors. Section 5.4.4 outlines a range of possibilities for training and mentoring activities.

The Strategy concludes by anticipating that both JCADM and SC-AGI will develop comprehensive work-plans derived from guidance presented in this Strategy and will regularly work together to review progress and adapt this Strategy to fit emerging opportunities or changes that will inevitably occur in SCAR’s operating contexts.

The overall vision pursued by this Strategy is provided in the form of two hypothetical testimonials which immediately follow this Executive Summary.