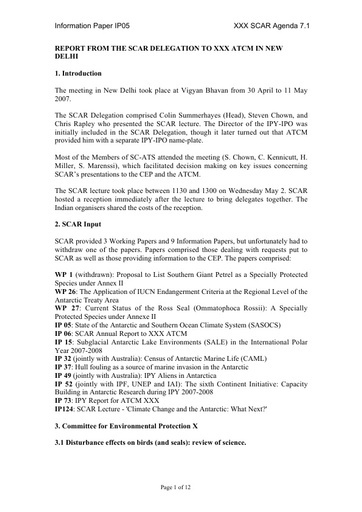 The SCAR Delegation comprised Colin Summerhayes (Head), Steven Chown, and Chris Rapley who presented the SCAR lecture. The Director of the IPY-IPO was initially included in the SCAR Delegation, though it later turned out that ATCM provided him with a separate IPY-IPO name-plate.

Most of the Members of SC-ATS attended the meeting (S. Chown, C. Kennicutt, H. Miller, S. Marenssi), which facilitated decision making on key issues concerning SCAR’s presentations to the CEP and the ATCM.

The SCAR lecture took place between 1130 and 1300 on Wednesday May 2. SCAR hosted a reception immediately after the lecture to bring delegates together. The Indian organisers shared the costs of the reception.