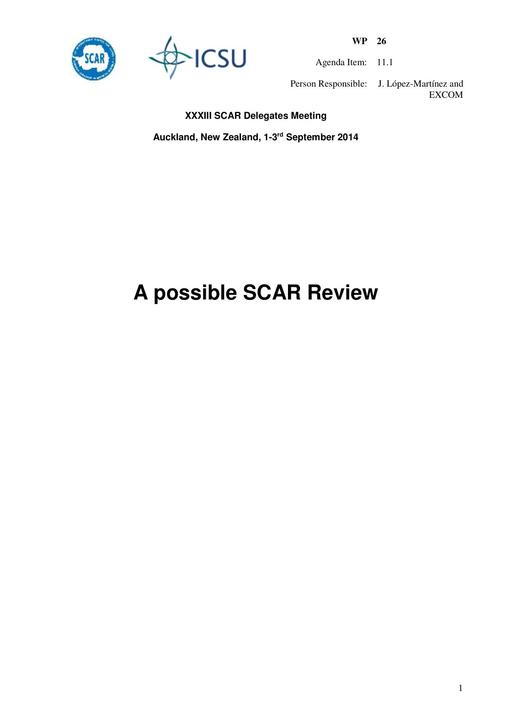 Introduction/ Background: The current SCAR structure and Rules of Procedure are those approved following the major SCAR review in 2004. The restructuring has been a major success. However, it in light of the last years’ experience and considering the SCAR current context and perspectives, it is timely to evaluate if possible improvements can or should be made.

Important Issues or Factors: Over the years the practice has been to adapt some aspects of the procedures to be more efficient both from a time and cost viewpoint (e.g. to hold SCAR Delegates Meetings immediately after the Business meetings and OSC). It should be analyzed if the evolution and perspectives of SCAR and its subsidiary bodies, SRPs and other initiatives recommend changes in the structure and rules of procedure. The view of the aforementioned groups is particularly relevant for this discussion. To conduct this exercise in parallel to the preparation of the new SCAR Strategic Plan 2017-2022 would facilitate synergies and coordination.

Recommendations/Actions and Justification: Delegates are asked to discuss/approve as appropriate if an ad hoc group to examine the SCAR structure and Rules of Procedure should be established and to decide its terms of reference.

Expected Benefits/Outcomes: This review would contribute to ensuring that SCAR is an efficient organization that is in a position to adapt to new circumstances. The ad hoc group jointly with the EXCOM would present to the SCAR Delegates a proposal of possible changes in the structure and Rules of Procedure to be discussed/approved in the XXXIV SCAR Meeting (Malaysia, August 2016).