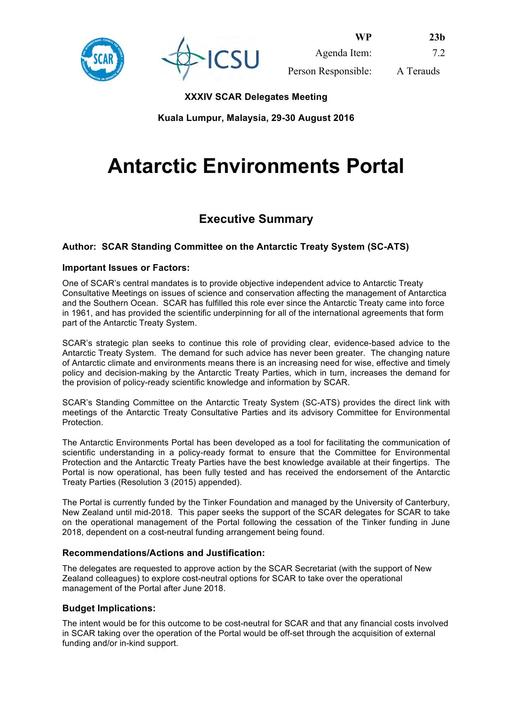 One of SCAR's central mandates is to provide objective independent advice to Antarctic Treaty Consultative Meetings on issues of science and conservation affecting the management of Antarctica and the Southern Ocean. SCAR has fulfilled this role ever since the Antarctic Treaty came into force in 1961, and has provided the scientific underpinning for all of the international agreements that form part of the Antarctic Treaty System.

SCAR's strategic plan seeks to continue this role of providing clear, evidence-based advice to the Antarctic Treaty System. The demand for such advice has never been greater. The changing nature of Antarctic climate and environments means there is an increasing need for wise, effective and timely policy and decision-making by the Antarctic Treaty Parties, which in turn, increases the demand for the provision of policy-ready scientific knowledge and information by SCAR.

The Portal is currently funded by the Tinker Foundation and managed by the University of Canterbury, New Zealand until mid-2018. This paper seeks the support of the SCAR delegates for SCAR to take on the operational management of the Portal following the cessation of the Tinker funding in June 2018, dependent on a cost-neutral funding arrangement being found.

The delegates are requested to approve action by the SCAR Secretariat (with the support of New Zealand colleagues) to explore cost-neutral options for SCAR to take over the operational management of the Portal after June 2018.

The intent would be for this outcome to be cost-neutral for SCAR and that any financial costs involved in SCAR taking over the operation of the Portal would be off-set through the acquisition of external funding and/or in-kind support.