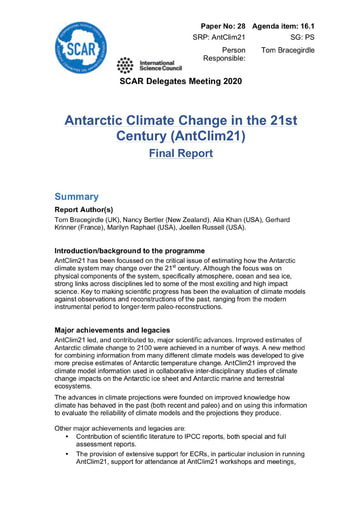 Introduction/background to the programme

AntClim21 has been focussed on the critical issue of estimating how the Antarctic climate system may change over the 21st century. Although the focus was on physical components of the system, specifically atmosphere, ocean and sea ice, strong links across disciplines led to some of the most exciting and high impact science. Key to making scientific progress has been the evaluation of climate models against observations and reconstructions of the past, ranging from the modern instrumental period to longer-term paleo-reconstructions.

AntClim21 led, and contributed to, major scientific advances. Improved estimates of Antarctic climate change to 2100 were achieved in a number of ways. A new method for combining information from many different climate models was developed to give more precise estimates of Antarctic temperature change. AntClim21 improved the climate model information used in collaborative inter-disciplinary studies of climate change impacts on the Antarctic ice sheet and Antarctic marine and terrestrial ecosystems.
The advances in climate projections were founded on improved knowledge how climate has behaved in the past (both recent and paleo) and on using this information to evaluate the reliability of climate models and the projections they produce. Other major achievements and legacies are: