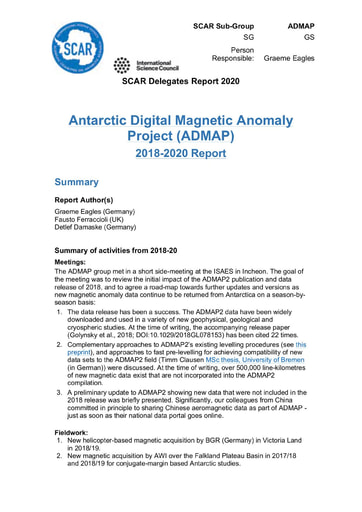 Expert Group of the Geosciences Group

The ADMAP group met in a short side-meeting at the ISAES in Incheon. The goal of the meeting was to review the initial impact of the ADMAP2 publication and data release of 2018, and to agree a road-map towards further updates and versions as new magnetic anomaly data continue to be returned from Antarctica on a season-by-season basis:

There have been no new ADMAP compilations since the data release paper in 2018. Instead, members of ADMAP as well as external groups have published a range of papers that use and exploit the ADMAP2 compilation for a variety of geophysical, geodynamic, and glaciological studies.