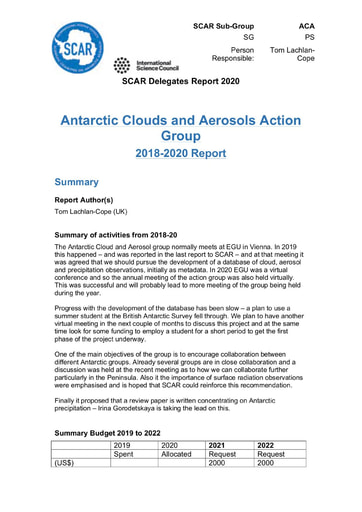 The Antarctic Cloud and Aerosol group normally meets at EGU in Vienna. In 2019 this happened – and was reported in the last report to SCAR – and at that meeting it was agreed that we should pursue the development of a database of cloud, aerosol and precipitation observations, initially as metadata. In 2020 EGU was a virtual conference and so the annual meeting of the action group was also held virtually. This was successful and will probably lead to more meeting of the group being held during the year.

Progress with the development of the database has been slow – a plan to use a summer student at the British Antarctic Survey fell through. We plan to have another virtual meeting in the next couple of months to discuss this project and at the same time look for some funding to employ a student for a short period to get the first phase of the project underway.

One of the main objectives of the group is to encourage collaboration between different Antarctic groups. Already several groups are in close collaboration and a discussion was held at the recent meeting as to how we can collaborate further particularly in the Peninsula. Also it the importance of surface radiation observations were emphasised and is hoped that SCAR could reinforce this recommendation.

Finally it proposed that a review paper is written concentrating on Antarctic precipitation – Irina Gorodetskaya is taking the lead on this.