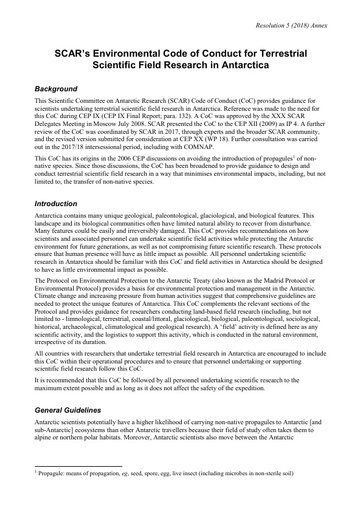 This Scientific Committee on Antarctic Research (SCAR) Code of Conduct (CoC) provides guidance for scientists undertaking terrestrial scientific field research in Antarctica. Reference was made to the need for this CoC during CEP IX (CEP IX Final Report; para. 132). A CoC was approved by the XXX SCAR Delegates Meeting in Moscow July 2008. SCAR presented the CoC to the CEP XII (2009) as IP 4. A further review of the CoC was coordinated by SCAR in 2017, through experts and the broader SCAR community, and the revised version submitted for consideration at CEP XX (WP 18). Further consultation was carried out in the 2017/18 intersessional period, including with COMNAP.

This CoC has its origins in the 2006 CEP discussions on avoiding the introduction of propagules1 of non- native species. Since those discussions, the CoC has been broadened to provide guidance to design and conduct terrestrial scientific field research in a way that minimises environmental impacts, including, but not limited to, the transfer of non-native species.