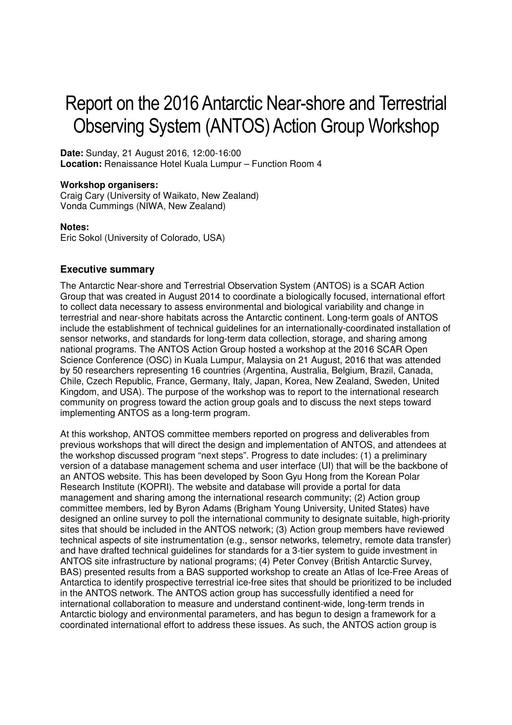 The Antarctic Near-shore and Terrestrial Observation System (ANTOS) is a SCAR Action Group that was created in August 2014 to coordinate a biologically focused, international effort to collect data necessary to assess environmental and biological variability and change in terrestrial and near-shore habitats across the Antarctic continent. Long-term goals of ANTOS include the establishment of technical guidelines for an internationally-coordinated installation of sensor networks, and standards for long-term data collection, storage, and sharing among national programs. The ANTOS Action Group hosted a workshop at the 2016 SCAR Open Science Conference (OSC) in Kuala Lumpur, Malaysia on 21 August, 2016 that was attended by 50 researchers representing 16 countries (Argentina, Australia, Belgium, Brazil, Canada, Chile, Czech Republic, France, Germany, Italy, Japan, Korea, New Zealand, Sweden, United Kingdom, and USA). The purpose of the workshop was to report to the international research community on progress toward the action group goals and to discuss the next steps toward implementing ANTOS as a long-term program.

At this workshop, ANTOS committee members reported on progress and deliverables from previous workshops that will direct the design and implementation of ANTOS, and attendees at the workshop discussed program “next steps”. Progress to date includes: (1) a preliminary version of a database management schema and user interface (UI) that will be the backbone of an ANTOS website. This has been developed by Soon Gyu Hong from the Korean Polar Research Institute (KOPRI). The website and database will provide a portal for data management and sharing among the international research community; (2) Action group committee members, led by Byron Adams (Brigham Young University, United States) have designed an online survey to poll the international community to designate suitable, high-priority sites that should be included in the ANTOS network; (3) Action group members have reviewed technical aspects of site instrumentation (e.g., sensor networks, telemetry, remote data transfer) and have drafted technical guidelines for standards for a 3-tier system to guide investment in ANTOS site infrastructure by national programs; (4) Peter Convey (British Antarctic Survey, BAS) presented results from a BAS supported workshop to create an Atlas of Ice-Free Areas of Antarctica to identify prospective terrestrial ice-free sites that should be prioritized to be included in the ANTOS network. The ANTOS action group has successfully identified a need for international collaboration to measure and understand continent-wide, long-term trends in Antarctic biology and environmental parameters, and has begun to design a framework for a coordinated international effort to address these issues. As such, the ANTOS action group is seeking to gain designation as a SCAR expert group by early 2017. As ANTOS shifts to an expert group, next steps include a cost-benefit analysis of SCAR investment in ANTOS, conducting the survey to identify candidate ANTOS sites, implementing the database design and user interface to create an ANTOS data portal website, developing a working relationship with COMNAP to communicate why it is necessary national programs invest in such an effort, and develop mock-up examples of the three investment tiers to facilitate this communication with national funding agencies and research programmes.