Icebergs destroy an enormous amount of biomass in polar shallow waters, which's carbon would otherwise be sequestered in the sediment.

As Earth’s climate warms, parts of our planet have less white and more blue and green. The white is the winter freezing of the sea surface, the blue is open water and the green are phytoplankton alg 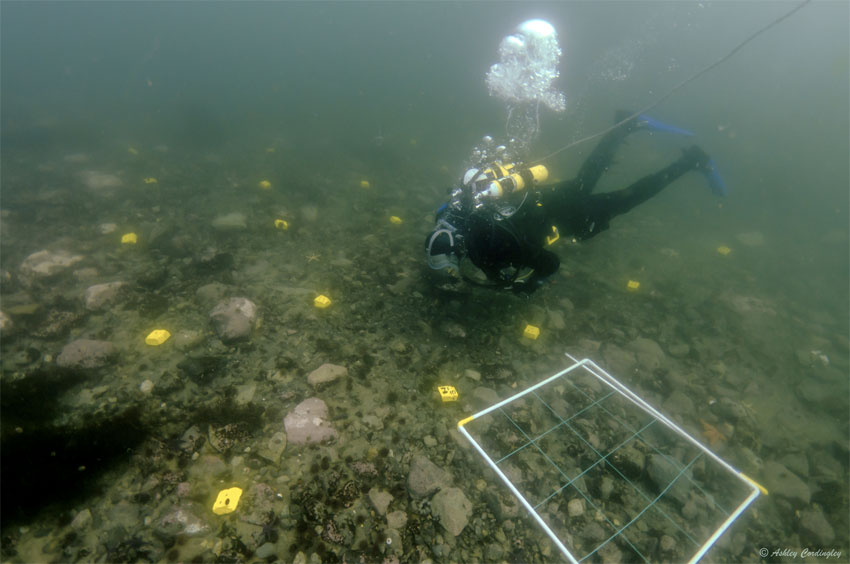 al blooms. Less white reflective sea ice means that Earth’s polar regions are absorbing more heat but the silver lining of this cloud is that phytoplankton blooms are bigger, providing more food for rich and abundant animals on the seabed. Those animals perform many hidden but important functions, one of which is capture and storage of carbon – the so called blue carbon ecosystem service. They are very good at this and may be storing quarter of a millions tons in West Antarctica’s shallows alone. This has not been obvious and a new paper in Global Change Biology http://onlinelibrary.wiley.com/doi/10.1111/gcb.13523/full shows there is a good reason why.

Between 2002 and 2003, divers placed a grid of concrete markers on the seabed, covering 225 m2. Every year these were resurveyed to see which had been hit by icebergs, the results recorded and those which were destroyed replaced annually; see cover photo (©Tobias Friedrich) and Fig. 1. Thirteen years later this is one of the longest running continuous disturbance experiments in the sea – showing the disturbance history of each m2 seabed within this grid. Growth of animals encrusting the boulders was mainly driven by the length of algal blooms but also by how long sea temperatures were positive. 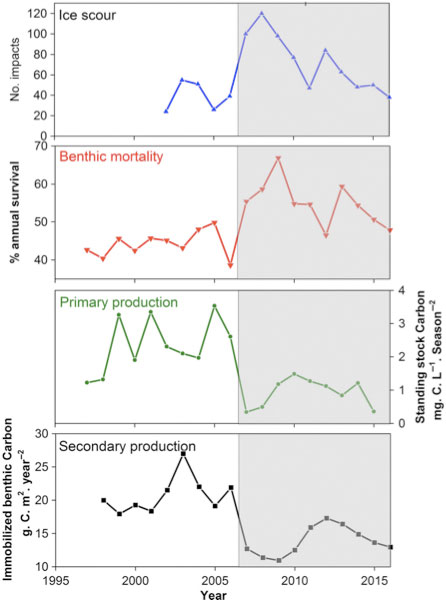 The surprize was that virtually the only important factor driving mortality, persistence of growth and carbon storage (C immobilization) was ice scour. Nearly a third of the seabed was hit every year, and only 7% escaped iceberg catastrophe during these 13 years.  In a bad year, such as 2009 two-thirds of life on the seabed could be wiped out. So when we measure biodiversity or carbon storage on the seabed what we are really measuring is just simply how long any given patch has recovered since it was last hit by an iceberg. By comparing areas of different (known) disturbance history it was found that five years doubled the carbon storage of the seabed. At Rothera Research station, where the study was carried out, it seems that it has undergone a shift from long lasting sea ice, low ice scour, and higher seabed biomass up to 2006 to briefer sea ice, high ice scour and low seabed biomass from 2007 onwards (Fig. 2).

The scouring by the iceberg killing fields (https://twitter.com/dscphrd/status/791901616626659328) may be recycling as much as 80 000 tonnes of carbon yr−1. Without scouring, such carbon could be stored and perhaps ultimately buried (sequestration).  If this happened the 2.3% of shelf which from the shallows could be as productive as all of Antarctica’s remaining continental shelf. This could happen in our lifetimes; The region's future, when glaciers reach grounding lines and iceberg production diminishes, is as a major global sink of carbon storage. To read more about polar blue carbon and a team investigating this around Antarctica visit the website of the Antarctic Seabed Carbon Capture Change project (www.asccc.co.uk).