AntEco at the ISAES 2015 meeting 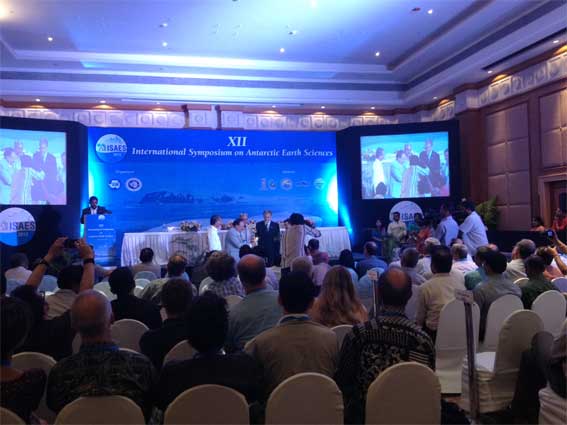 Between July 13 and 17th, Goa, India became the center of interest for Antarctic Research. This exotic and magical city was selected as organizer of the XII International Symposium on Antarctic Earth Science (ISAES 2015). This SCAR-initiative aimed at showcasing Antarctic Geoscience research.

The Opening Ceremony (july the 12th) was held at the Goa Marriot Resort and Spa and hosted by the Indian Minister of Ministry of Science and Technology and Earth Science (Dr. Harsh Vardhan) and members of the organizer committee including the Earth Science Organization (ESSO), the National Centre for Antarctic and Ocean Research (NCAOR), and the Scientific Committee on Antarctic Research (SCAR).

More than 350 delegates from more than 30 countries attended to the Conference. The conference was subdivided into 26 sessions that were held in parallel during five days. Among them, Session 21 titled “Key drivers of Antarctic biodiversity through the Cenozoic: the influence of climate, oceanography and tectonics” was coordinated by three convenors, two of them: Dr. Pete Convey and Dr. Claudio González-Wevar are members of the Steering Group Members of AntEco. This session explored the relationship between Southern Ocean and Antarctic environments and biodiversity through the Cenozoic, linking biotic patterns from the past to the present with changing climate and the geological evolution of the continent. Paleontological studies through the Cenozoic, alongside recent genetic studies of modern taxa, have the potential to reveal important insights into past climate, tectonic evolution, and ocean and wind-mediated dispersal routes across the Southern Ocean and Antarctic continent. They are also key to understanding the origin, distribution, abundance and diversity of the modern Antarctic faun and flora. The session included 2 plenary talks given by Dr. Alistair Crame (BAS) and Dr. Pete Convey (BAS) and 4 oral presentations, as well as 4 poster presentations.