A new publication, titled "Latitudinal changes in the trophic structure of benthic coastal food webs along the Antarctic Peninsula", has been published in Marine Environmental Research. The study contributes to our 2012-2020 Scientific Research Program ‘‘State of the Antarctic Ecosystem’’ (AntEco). You can read the publication here. 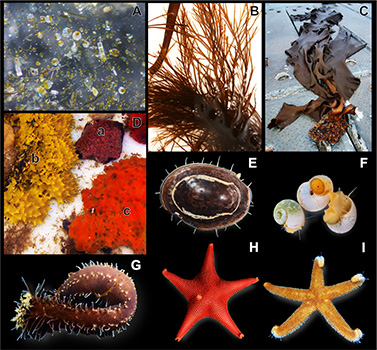 Stable isotopes of C and N have been used to assess the effect of the duration of the sea ice season on the structure of benthic, Antarctic coastal food webs. Samples of suspended particulate organic matter, macroalgae and macroinvertebrates were collected at five subtidal rocky sites across a latitudinal gradient along the western Antarctic Peninsula and among the South Shetland Islands. We tested the hypotheses that trophic positions of omnivores decrease, and food web structure becomes more redundant at higher latitudes. A latitudinal shift in the isotope baseline was detected for both δ13C and δ15N, but the trophic positions of macroinvertebrates and their relative positions along the δ13C axis and were basically constant across sites, even after rescaling stable isotope ratios to account for shifts in the baseline. Although the northernmost and southernmost study sites differed significantly in most of the metrics of the food web structure, changes with latitude and the duration of the sea ice season were non-monotonic. Highly productive phytoplankton blooms during the ice-free season at Esperanza Bay and Rothera Point may explain the observed pattern, as they result in a massive supply of planktonic organic matter to the detritus bank in the seabed and, hence, shorten the C range and increase trophic redundancy. If this hypothesis is correct, the intensity of the summer phytoplankton bloom can be as relevant for the structure of the benthic marine food web as the duration of the sea ice season.