A new publication, titled "Visual Imaging of Benthic Carbonate-Mixed Factories in the Ross Sea Region Marine Protected Area, Antarctica", has been published in Minerals. The paper investigates the abundance of calcifiers vs. non-calcifiers in the Ross Sea through a Remotely Operated Vehicle survey. The article is part of the Special Issue Polar Marine Carbonates and contributes to the ANTOS Expert Group. 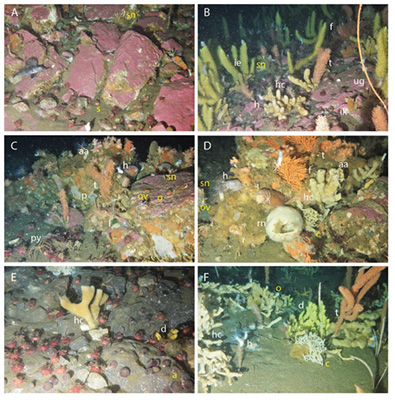 Marine biogenic skeletal production is the prevalent source of Ca-carbonate in today’s Antarctic seas. Most information, however, derives from the post-mortem legacy of calcifying organisms. Prior imagery and evaluation of Antarctic habitats hosting calcifying benthic organisms are poorly present in the literature, therefore, a Remotely Operated Vehicle survey was carried out in the Ross Sea region Marine Protected Area during the 2013–2014 austral summer. Two video surveys of the seafloor were conducted along transects between 30 and 120 m (Adelie Cove) and 230 and 260 m (Terra Nova Bay “Canyon”), respectively. We quantified the relative abundance of calcifiers vs. non-calcifiers in the macro- and mega-epibenthos. Furthermore, we considered the typology of the carbonate polymorphs represented by the skeletonized organisms. The combined evidence from the two sites reveals the widespread existence of carbonate-mixed factories in the area, with an overwhelming abundance of both low-Mg and (especially) high-Mg calcite calcifiers. Echinoids, serpulids, bryozoans, pectinid bivalves and octocorals prove to be the most abundant animal producers in terms of abundance. The shallower Adelie Cove site also showed evidence of seabed coverage by coralline algae. Our results will help in refining paleoenvironmental analyses since many of the megabenthic calcifiers occur in the Quaternary record of Antarctica. We set a baseline to monitor the future response of these polar biota in a rapidly changing ocean.