Live Episode of The IcePod with SC-HASS Member Vicki Heinrich 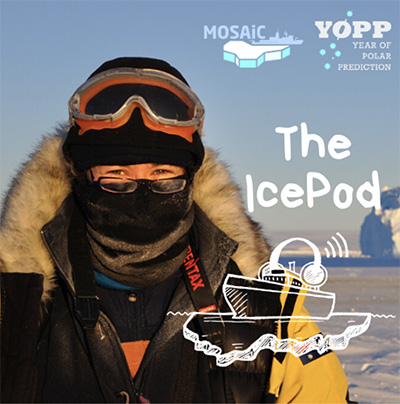 The IcePod is the podcast about polar science and the people. The IcePod is produced by Kirstin Werner and Sara Pasqualetto from the International Coordination Office of the Year of Polar Prediction (YOPP). The podcast usually talks with scientists who went on board Polarstern, the German research icebreaker, for the biggest research expedition in the Arctic. Now The IcePod goes live and Antarctic.

For the first live episode "Paid to Look at the Clouds and Play with Balloons" the team broadcasted during the APECS workshop "Antarctic Science: Global connections", and met with the Australian weather observer and Ph.D. candidate Vicki Heinrich. Vicki Heinrich is also a member of SCAR's Standing Committee on Humanities and Social Sciences (SC-HASS).

For more than ten years, Vicki has been a regular in the Antarctic to look at the clouds and play with balloons, all courtesy of the Australian Bureau of Meteorology (BoM). To be trained on the ten types of clouds, she found this opportunity once in a newspaper, and it saved her from the mining industry. To get paid to stay twelve months at a weather station in Antarctica still feels extraordinary to her – as are the beauty of the Antarctic icescape and the many friendships she has built along the way, both with colleagues and penguin colonies.

So why did Vicki then move into psychology? In 2017, she started her Ph.D. thesis with the project "Use of Weather and Climate Information: Risk perception and decision-making in the Antarctic" in order to learn more about how people use weather information to make their daily decisions. To get to know the other side – the user's perspective – is clearly an add-on to her career, and to us as her project got YOPP-endorsed. It turns out – as a preliminary result – everybody wants to know about the wind.

You can find all IcePod Episodes on Spotify, Apple Podcast, Castbox (no sign-up needed) or on the IcePod website.