The recovery of a 1.5 million yr long ice core from Antarctica is recognized as one of the greatest challenges outlined by the International Partnership in Ice Core Sciences (IPICS) and is a key in our understanding of the Quaternary Climate.  It has been shown that such an ice record may be found on the Plateau of the East Antarctic ice sheet and international efforts have been conducted to refine criteria and find optimal locations. After several years of geophysical survey and modelling, the European team supported by the EC project "Beyond EPICA" has found a very promising site ~35 km from Concordia Station, the Italian-French base on the high Antarctic Plateau (see Figure 1, top left panel). The drill site is located at Little Dome C (LDC), an area of about 10 km2. Dome C is 1000 km from the coast, at an altitude of 3233 m above sea level, and is run by IPEV and the PNRA, the French and Italian polar agencies. 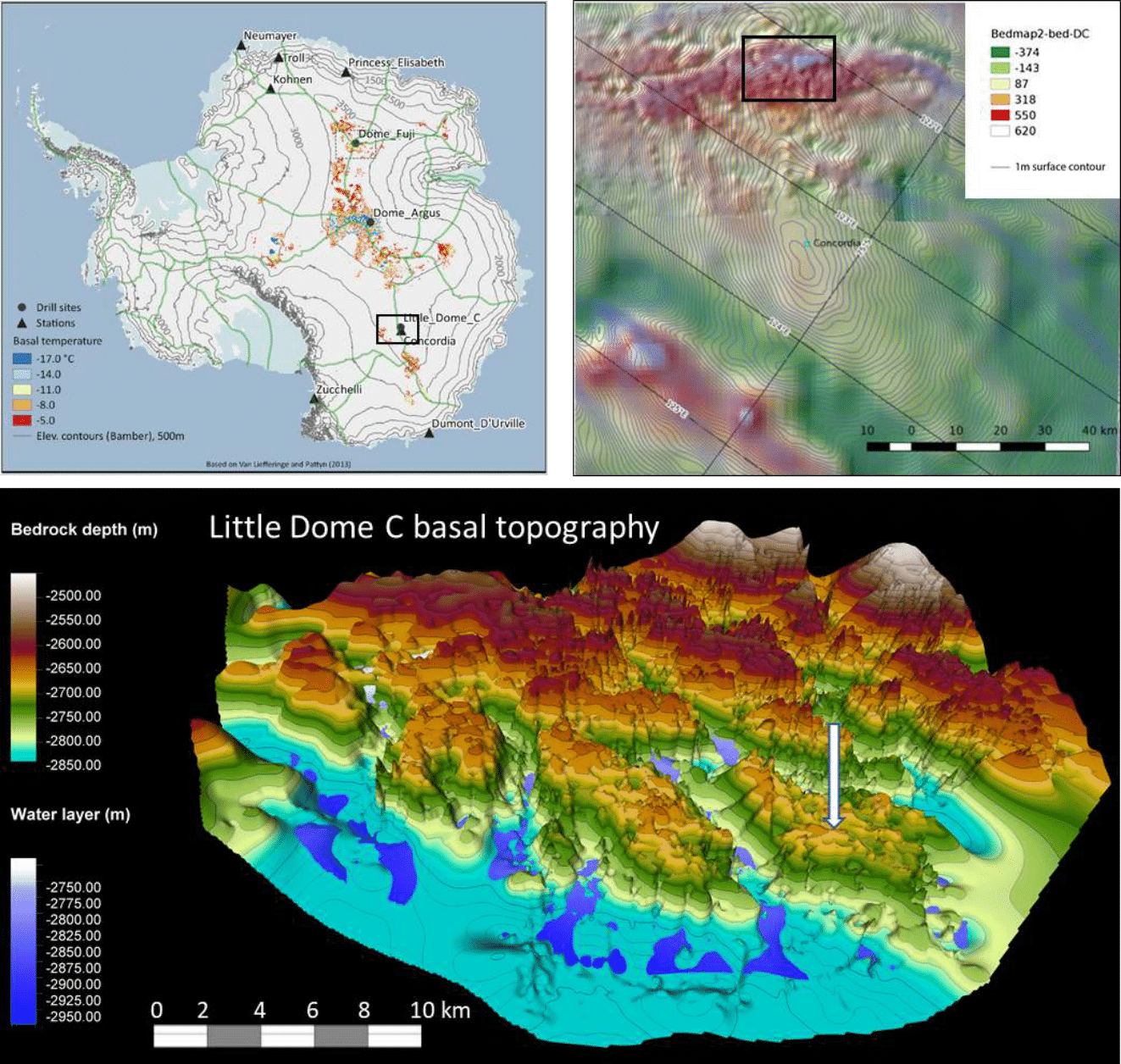 The project "Beyond EPICA - Oldest Ice Core: 1.5 Myr of greenhouse gas – climate feedback" (Beyond EPICA) is coordinated by Prof. Carlo Barbante from the Ca’ Foscari University of Venice and the Institute of Polar Sciences of the National Research Council of Italy (ISP-CNR) in Venice. This final step follows the previous EU project, led by Prof. Olaf Eisen from the Alfred Wegner Institute (AWI) in Germany.

On 1st June 2019 the Beyond EPICA project started with the aim of drilling for and recovering ice from up to 1.5 Million years ago in Antarctica. The previous EPICA project recovered 800,000 year old ice. This project aims to go beyond that. “We hope that this core will give us information on the Antarctic climate and the greenhouse gases present during the Middle Pleistocene Transition (MPT), which occurred between 900,000 and 1.2 Million years ago”, says Carlo Barbante, coordinator of the project. “During this period the climatic periodicity transitioned from 41,000 to 100,000 years between ice ages. Why this change happened is the mystery we want to resolve.”

With this goal in mind, the LDC area was selected after an initial period of coordinated actions, including more than 4,000 km of airborne and ground-based Radar Echo Sounding (RES) survey and basal temperature assessment based on vertical velocity and temperature measurements. All measurements were interpreted within a temperature and age modelling framework. These actions were performed in the frame of the previous EU project, led by researchers from the British Antarctic Survey (BAS) and the Institut des Géosciences de l’Environnement (IGE). Over the last weeks, researchers from an international team composed of scientists from AWI, University of Copenhagen (UCPH) and the University of Alabama (UA) have finally scanned the area of interest and a group of experts have precisely selected the exact site for drilling operations during the 2020-21 field season. Here, the characteristics of the deeper layers, with ice of least 1.5 million years old should be preserved with a good temporal resolution.

“It is the first time that a site for deep drilling has been selected with such a high precision and effort. The new radar measurement showed more clearly than before, that the ice there is well stratified and most probably very old”, says Olaf Eisen (AWI).

The whole  ‘Beyond EPICA – Oldest Ice Core’ project has been funded with a 11 million Euro grant by the European Commission and will take six years in total to drill, collect and analyse the ice from this very deep hole, if everything goes to plan.

The skills developed during this quest will benefit to the entire ice core community.
Of interest to the community might also be the 3rd IPICS Open Science Conference to be held in Crans-Montana, Switzerland, now postponed until 2021.

Prof. Dr. Olaf Eisen, Alfred Wegner Institute (phone: +49 471 4831-1969 or This email address is being protected from spambots. You need JavaScript enabled to view it.).