The Greenland and Antarctic ice sheets under 1.5°C global warming 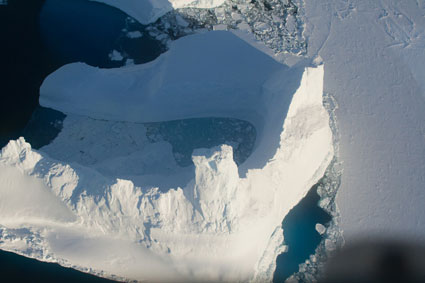 A new paper entitled 'The Greenland and Antarctic ice sheets under 1.5°C global warming' has been published in Nature Climate Change. This work has been carried out in the framework of ISMASS (Ice Sheet Mass Balance and Sea Level expert group) supported by SCAR along with CliC (the Climate and Cryosphere project of the World Climate Research Programme) and IASC (the International Arctic Science Committee)

The paper provides a review of ice sheets in a 1.5°C warmer world - a recent climate mitigation target highlighted by the Intergovernmental Panel on Climate Change (IPCC). It suggests that current predictions of future changes in ice-sheet mass balance are questionable due to incomplete understanding of atmospheric circulation changes around Greenland and ocean circulation around Antarctica. However, the study concludes it is important to limit global warming by 2100 to 1.5°C to maximise the chance of avoiding so-called tipping points that would dramatically accelerate mass loss.

Today, sea level rises at a pace of around 4mm per year and is accelerating. The major contributions to this rise are due to ocean expansion, melting glaciers and – becoming increasingly important – melting of the Greenland and Antarctic ice sheets. Those ice sheets are commonly considered as the ‘sleeping giants’ on Earth, as together they can potentially lead to sea-level rise by more than 70 metres over thousands of years.

Despite improved observations and computer model simulations since the IPCC’s Fifth Assessment Report (AR5) published in 2013, the review highlights some lingering key gaps in knowledge regarding climate forcing of the ice sheets and their resulting responses. On longer time scales, both ice sheets may reach tipping points above around a 1.5-2.0°C limit, leading to irreversible mass loss. For Greenland this is due to increased melting of the ice sheet, while for Antarctica this is due to marine instabilities of certain sectors of the ice sheet, in particular the West Antarctica ice sheet. This would lead to multi-metre sea level rise on centennial to millennial time scales, which has existential consequences for small island states and coastal cities across the world.

The paper was published on the Nature Climate Change website on 12 November 2018, and is available to view and download from there.