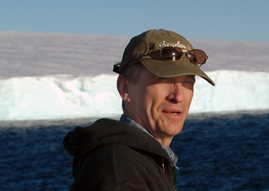 Dr. Eugene Domack, Professor of Geological Oceanography at the University of South Florida College of Marine Science, died on Nov. 20, 2017 after a brief illness.

Gene earned his Ph.D. in Geology from Rice University in 1982. He was hired at Hamilton College in 1985, after working for two years as an Exploration Geologist for Union Oil Company of California. He joined USF College of Marine Science in 2014. His scientific career was dedicated to the study of climate change. His primary passion was the history and impact of climate change in Antarctica. Gene advanced the Antarctic community’s understanding of radiocarbon dating of glacial marine sediment, and developed models of modern sedimentation within glacially-carved fjords and beneath ice shelves in order to interpret geologic records of cryosphere processes.

Gene channeled his passion for scientific investigation and discovery into building collaborative research programmes at the local to international scales. His fieldwork led him all over the globe, on both land (Namibia, Australia, Greenland, Svalbard, Oneida Lake NY, and Whidbey Island WA) and at sea, where he served as Chief Scientist or Co-Chief Scientist on 15 Antarctic cruises. His work was conducted with collaborators from around the world. A point of pride in his career was launching the international Larsen Ice Shelf System, Antarctic (LARISSA) programme in 2007, one of the first projects funded by the National Science Foundation’s Antarctic Integrated System Science programme. LARISSA was created to document and understand the complex and highly interconnected geological, ecological, glaciological, oceanographic, and climatic systems involved in the collapse of the Larsen Ice Shelf system, and the subsequent evolution of the Antarctic Peninsula region after the collapse. Gene was especially proud of LARISSA’s interdisciplinary work, international collaborative team, its logistical coordination both aboard the RVIB Palmer and its cooperation with sister Antarctic agencies from around the world, and the numerous and diverse opportunities that the programme provided for students and early-career researchers.

Many current members of the Antarctic research community can trace their entrance into this special and supportive community of scientists to Gene’s mentorship. Gene gave hundreds of students their first experiences in research, in the field, at sea, in Antarctica, in the laboratory, and at professional conferences. He was a strong advocate for his students, many of whom are now leaders in the geologic and Antarctic communities. For his sustained high-impact research and student mentoring, Gene was awarded a John Simon Guggenheim Memorial Foundation Fellowship in 2004, and was inducted as a Fellow of the American Geophysical Union in 2011, and as a Fellow of the American Association for the Advancement of Science in 2012.

Gene’s premature passing is a tremendous loss for the Antarctic community; his creative work will inspire scientists for years to come.