In April 2009, a small group gathered at the University of Leeds to begin discussions about reconstructing the past topography and bathymetry of and around Antarctica. At the time, numerical models of past ice sheet behaviour were being simulated using the modern topography but many had realised that a range of geological processes had caused significant change in the landscape since the initial growth of the ice sheet 34 million years ago. This meant that calculations of the configuration and behaviour of the ice sheets during key climate transitions were subject to uncertainty because they did not account for the fact the landscape had evolved. Furthermore, paleo-ocean current and water-mass processes were also problematic to reconstruct without proper circum-Antarctic paleo-water depths. The working group that began at Leeds worked on behalf of the former SCAR Scientific Research Programme Antarctic Climate Evolution (ACE), and then continued to the present day, producing a number of outputs under the Past Antarctic Ice Sheet Dynamics (PAIS) SRP. Our goal was to provide reconstructions that would provide an objective base for ice sheet models, paleo-ocean current processes, palaeoclimate data interpretation and visualisation of past landscapes. 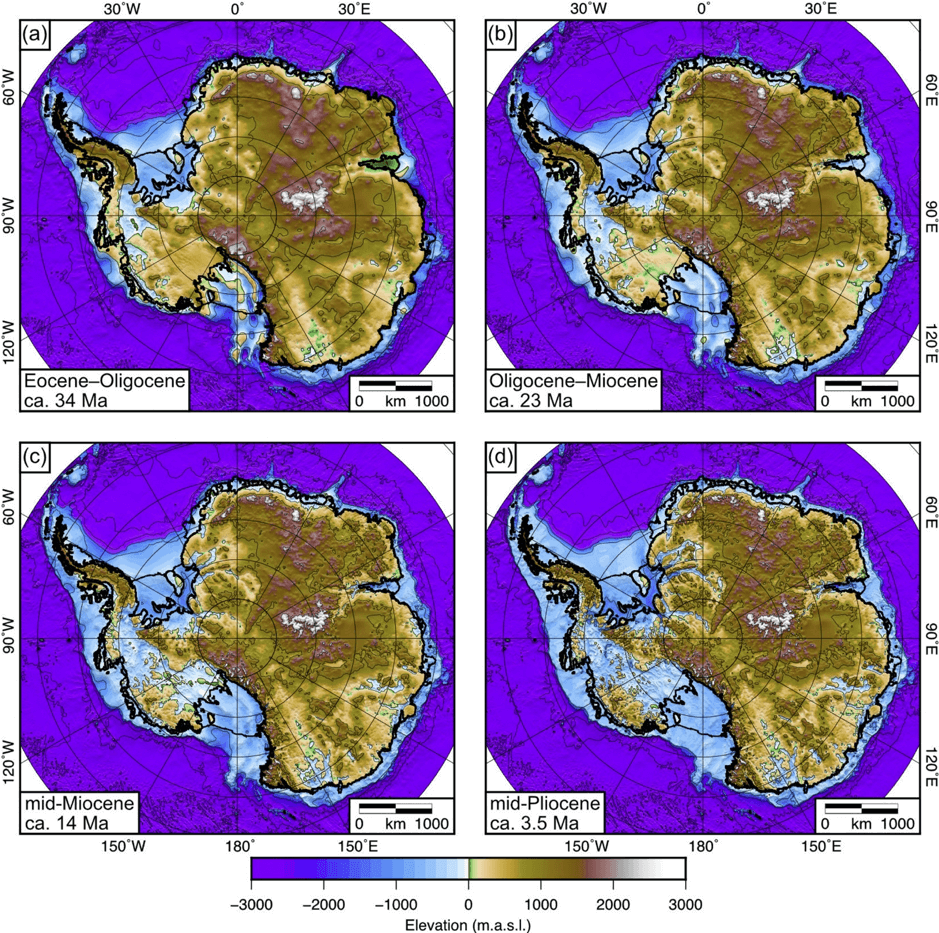 It is now 10 years later and we have just published a major set of reconstructions based on wide ranging discussion with the working group and the wider SCAR community. The paper, led by Guy Paxman at Durham University, provides onshore topographies for the Eocene-Oligocene transition (ca. 34 Ma), the Oligocene-Miocene boundary (ca. 23 Ma), the mid-Miocene climate transition (ca. 14 Ma) and the mid-Pliocene warm period (ca. 3.5 Ma). In the topographies, we accounted for the myriad process that have acted to change the landscape. Amongst other things, we adjusted the modern topography for patterns of past glacial erosion, sedimentation, thermal subsidence, horizontal plate motion, volcanism and ice sheet loading. To enable this, a circum-Antarctic stratigraphic dataset was produced in order to calculate sediment volumes that lie offshore. This acted as a key constraint for quantifying the volume of sediment eroded from the continent and its large-scale source region. Modern topography was interpreted in terms of its erosional signal and the offshore material was ‘backstacked’ onto the land. Because many of the processes being addressed involved redistribution of mass, a key aspect of the reconstructions was the use of an elastic plate model of the lithosphere to isostatically re-adjust the topography as mass was moved.

There is uncertainty in the magnitude, timing and spatial pattern of geological processes on a continental and regional scale. The working group accounted for this by providing maximum, minimum and median topographic reconstructions which can therefore be used by the Antarctic community to explore the impact of topography on a wide range of processes including ice sheet behaviour, climate impacts, biogeography, oceanic circulation, sea level change to name but a few.  In the Eocene-Oligocene topography we reconstruct a landscape that has 25% greater land area above sea level.  The basins in the reconstructions then get progressively deeper towards the present day with long-term erosion rates ranging between 10-20 m/Myr. In East Antarctica, erosion decreased by ca. 50% after the Mid-Miocene, whereas in West Antarctica the rates approximately doubled at this time, implying that the glaciers in the East Antarctic margin were susceptible to marine processes earlier than those in West Antarctica.

Many Antarctic scientists contributed to workshops and discussions on palaeotopography and paleobathymetry over the past decade and we take this opportunity to extend our gratitude to all of them. Our work is not yet complete however, and in the near future we expect to produce reconstructions that extend further back in time to the Late Cretaceous (ca. 70 Ma) as well as bathymetric reconstructions for the entire Southern Ocean region for all the key transitions mentioned above.