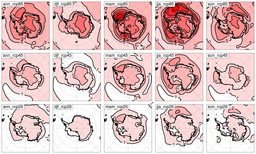 Climate model projections of 21st century change in surface air temperature (temperature 2m above the surface) by the end of the 21st century (2069-2098) following a range of low (RCP2.6) medium (RCP4.5) and high (RCP8.5) radiative forcing scenarios of known important climate drivers such as greenhouse gas increases and stratospheric ozone recovery. Each column shows a different season as follows: austral summer is defined as December-February; autumn is March-May; winter is June-August; and spring is September-November. Changes are all relative to the period 1970-1999 in ‘historical’ climate model simulations with observed levels of greenhouse gases and other known natural and anthropogenic factors. Contour intervals are 1 K. The climate model dataset used is the Coupled Model Intercomparison Project Phase 5 (CMIP5) dataset (Taylor et al., 2012).

The projection data from the multiple different climate models was combined using the method detailed in Bracegirdle and Stephenson (2012). This provides more precise and robust projections of Antarctic climate change by accounting for biases associated with sea ice. The observationally-constrained dataset used calibrate the projections is ERA-Interim (Dee et al., 2011). Different numbers of CMIP5 models were available for different scenarios and are listed below.

Any questions on these maps or requests for further information should be addressed to Tom Bracegirdle (This email address is being protected from spambots. You need JavaScript enabled to view it.).

We acknowledge the World Climate Research Programme's Working Group on Coupled Modelling, which is responsible for CMIP, and we thank the climate modeling groups (listed in Table XX of this paper) for producing and making available their model output. For CMIP the U.S. Department of Energy's Program for Climate Model Diagnosis and Intercomparison provides coordinating support and led development of software infrastructure in partnership with the Global Organization for Earth System Science Portals. The European Centre for Medium Range Weather Forecasting is

thanked for providing the ERA-Interim datasets. 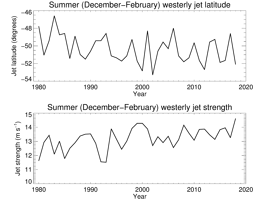 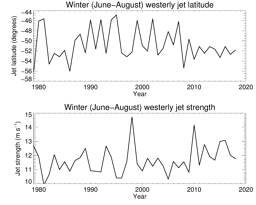 This dataset documents the trends and variability in the latitude and strength of the belt of lower-atmosphere westerly winds over the Southern Ocean, referred to as the ‘westerly jet’. Time series of annual mean and seasonal diagnostics are available for the period 1979-present are documented, specifically time series of seasonal and annual mean jet latitude and strength. The diagnostics are derived from the European Centre for Medium Range Weather Forecasts (ECMWF) ERA-Interim reanalysis (Dee et al., 2011), which is an observationally-constrained reconstruction of atmospheric conditions. The broad characterisation of the westerly winds into these simple diagnostics has been found to be useful for understanding long-term climate change due to contrasting drivers of change and impacts on other aspects of the climate system.

The jet indices shown here were calculated following the definition detailed in Bracegirdle et al. (2018). This definition is based on westerly wind in the lower atmosphere (850 hPa, which is approximately 1.5 km above mean sea level). At each latitude the all-longitude (zonal) average was calculatd between 75°S and 10°S. The maximum in this diagnostic is defined as the jet strength and its location defines the jet latitude. This is a very similar approach to that used in a number of other studies, e.g. Kidston and Gerber (2010), Son et al. (2010) and Swart and Fyfe (2012).

More detailed information can be found on this topic at the NCAR/UCAR Climate Data Guide: https://climatedataguide.ucar.edu/climate-data/southern-hemisphere-westerly-jet-strength-and-position

Any questions on these time series or requests for further information should be addressed to Tom Bracegirdle (This email address is being protected from spambots. You need JavaScript enabled to view it.).

The European Centre for Medium Range Weather Forecasting is thanked for providing the ERA-Interim datasets.

News and Updates from the AntClim21 Community.

Publications, data and links of interest to those interested in predicting future Antarctic climate

The Importance of sea ice area biases in 21st century multimodel projections of Antarctic temperature and precipitation:  This publication is led by Dr. Thomas Bracegirdle from the AntClim21 steering committee and the Brittish Antarctic Survey.  Abstract: Climate models exhibit large biases in sea ice area (SIA) in their historical simulations. This study explores the impacts of these biases on multimodel uncertainty in Coupled Model Intercomparison Project phase 5 (CMIP5) ensemble projections of 21st century change in Antarctic surface temperature, net precipitation, and SIA. The analysis is based on time slice climatologies in the Representative Concentration Pathway 8.5 future scenario (2070–2099) and historical (1970–1999) simulations across 37 different CMIP5 models. Projected changes in net precipitation, temperature, and SIA are found to be strongly associated with simulated historical mean SIA (e.g., cross-model correlations of r = 0.77, 0.71, and −0.85, respectively). Furthermore, historical SIA bias is found to have a large impact on the simulated ratio between net precipitation response and temperature response. This ratio is smaller in models with smaller-than-observed SIA. These strong emergent relationships on SIA bias could, if found to be physically robust, be exploited to give more precise climate projections for Antarctica.  Bracegirdle, T.J., Stephensn, D.B., Turner, J., and Phillips, T.

Consistent evidence of increasing Antarctic accumulation with warming: Changes in surface mass balance in the Antarctic Ice Sheet support a negative contribution to sea level because of warmer air’s higher moisture capacity causing increased precipitation. Strong natural variability has made it difficult to find a correlation between observations of temperature and accumulation change. Both the ice-core data modeling results and the palaeo-simulations were used to create a projection of sea-level fall that competes with surface melting and other dynamical losses. Frieler, K., Clark, P., He, F., Buizert, C., Reese, R., Ligtenberg, S., Broeke, M., Winkelmann, R., Levermann, A. (2015). Consistent evidence of increasing Antarctic accumulation with warming. Nature Climate Change, 5, 348-352.

Reconstruction of Westerly wind influence on West Antarctica shows current situation is unprecedented in past 100,000 years: A reconstruction of atmospheric circulation around Antarctica revealed that the recent southward migration of the westerly winds as expressed in the positive trend of the Southern Annular Mode (SAM) due to increases in greenhouse gases and ozone depletion has caused unprecedented marine air masses transport into West Antarctica which led to increased precipitation and a rise in temperature. Mayewski, P. A. et al. (2013) West Antarctica's sensitivity to natural and human-forced climate change over the Holocene. Journal of Quaternary Science 28, 40-48

Positive trend of SAM not statistically significant in CMIP5: The intensification of the Westerly winds (or SAM) along the Amundsen / Bellinghausen Seas have been suggested as principle forcing for upwelling of warm, circum polar deep water, leading to rapid loss of ice from beneath ice shelves. A comparison of the CMIP5 modelling experiments for the IPCC representative concentration pathways RCP4.5 and RCP8.5 scenario projections distinguishes between model uncertainties and internal climate variability. The results indicate that due to large internal climate variability, the intensification of SAM is statistically significant in the CMIP5 model ensemble at one (two) sigma standard deviations only at 2030 (2065). Bracegirdle, T.J., Turner, J., Hosking, J.S., Phillips, T. (2014) Sources of uncertainty in projections of twenty-first century westerly wind changes over the Amundsen Sea, West Antarctica, in CMIP5 climate models, Climate Dynamics, 1-12.

Increase in Antarctic Sea Ice not captured in CMIP5 modelling experiments: A comparison of trends and annual variability of 18 models used in the CMIP5 ensemble runs shows unsurprisingly large inter-model variability. More importantly though, all models produce a negative sea ice trend, which is forced by an earlier trend. This suggests that the forcing mechanism causing the currently observed increase in the Ross Sea Region are not captured and simulated incorrectly. Turner, J., Bracegirdle, T., Phillips, T., Marshall, G., Hosking, J.S. (2013) An initial assessment of Antarctic Sea Ice Extent in the CMIP5 Models. Journal of Climate, 26, 1473-1484

Source of iron fertilisation in the Ross Sea region from ocean upwelling: Observations show that the Ross Sea polynya has low concentration of bio-available iron (Fe). Extensive algae blooms during summer indicate either an oceanic (upwelling) or atmospheric (dust from the Tran Antarctic Mountains) contribute significantly to the Fe budget in the Ross Sea and area of Antarctic Bottom Water formation. Analysis of Fe concentrations in sea ice and snow samples suggests that the Fe from atmospheric sources accounts for ~15% of the observed primary productions. This suggests that ocean upwelling is the major driver of Fe delivery and thus primary productivity. Thus changes in ocean currents (and to a lesser degree of atmospheric circulation) could influence the carbon uptake efficiency in the Ross Sea. Winton, V., Dunbar, G., Bertler, N., Millet, M.-A., Delmonte, B., Atkins, C., Chewings, J. and Andersson, P. (2014): The contribution of Aeolian sand and dust to iron fertilisation of phytoplankton blooms in the southwestern Ross Sea, Antarctica. Global Biogeochemical Cycles, 28: 4, 423-436

The concept of Antarctic Climate Indicators is that there is at present no central place that jointly displays or documents iconic climate variables relevant to Antarctica and the Southern Ocean, such as the Southern Annular Mode / westerly winds, Southern Hemisphere sea ice extent and Antaerctic Peninsula temperatures. AntClim21 is currently working to collating such Antarctic Climate Indicators (ACIs) which are being added to this webpage.

Check out this fantastic video lecture by AntClim21 Steering Committee member, Joellen Russell from the "Earth Transformed" lecture series. This lecture looks at the ocean’s role in climate, heat, and carbon uptake and is part of a public lecture series focusing on drivers and impacts of climate change in the world around us.  https://www.youtube.com/watch?v=ew2vi9i0Kpg