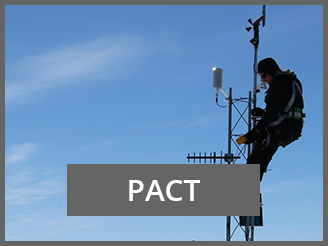 Polar Atmospheric Chemistry at the Tropopause (PACT) aimed to improve understanding of the distribution and variability of ozone in the polar upper troposphere–lower stratosphere (UTLS) region and the feedbacks of ozone changes to polar climate.

PACT was approved as an Action Group in 2008 and should have ended in 2016, though the group continued working, hoping to produce a publication on the outcomes of the group for submission to the journal Atmospheric Chemistry and Physics. After some years of inactivity, the group was ended in 2021.

PACT work was focused on finalising a database on tropopause region parameters that was derived using all available ozonesonde measurements poleward of 50° latitude. The ozonesonde data were obtained from the World Ozone and Ultraviolet Radiation Data Centre (WOUDC), the Network for the Detection of Atmospheric Composition Change (NDACC) and the National Oceanic and Atmospheric Administration’s Earth System Research Laboratory. The earliest data previously used were from Syowa in Antarctica (1966), although the majority of information came from the 1990s and later years.

The goal of PACT is to provide a unique and convenient set of observational data and analyses derived from high-latitude ozonesonde measurements to help improve understanding of the distribution and variability of ozone in the extratropical tropopause region and the feedbacks of ozone change to polar climate.