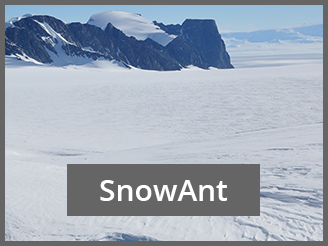 The Action Group for Snow in Antarctica (SnowAnt) was established in 2014 and aimed to improve the knowledge on depositional and metamorphic processes in Antarctic snow and its feedbacks to the climate system; to develop a snow classification for Antarctica; to protect pristine snow areas, and to implement a database to document disturbed areas, historic snow profiles, accumulation data from AWS, stake farms, surface radar profiles, shallow firn–snow cores.

Over the period 2014 to 2016, SnowAnt activities were twofold: organization of Snow in Antarctica specific sessions at EGU 2016 (merged due to too few participants) and SCAR-OSC 2016. The other activity was the organization of the annual Snow Science Winter Schools, which brought about 50 students in contact with SCAR, and provided a sound background on modern methods in snow analysis:

Significant progress has been made in recognizing snow as an important element of Antarctica, as demonstrated by successfully setting up a specific snow session for OSC 2016. However, it is extremely difficult to get researchers motivated to work for the very long-term objectives of SnowAnt.

For the period 2016 to 2018, the key initiative was to find additional active members for the Action Group. This was done by more actively promoting the topic within the Snow Science Schools and in other snow related conferences.

Collaboration with the Action Group on Geological Heritage and Geo-conservation (Geoconservation) was discussed during the OSC 2018. The goal of this collaboration is to use the knowledge with respect to the goals of protecting pristine snow areas and have the issue taken up by Antarctic Treaty member states.

The key goals for SnowAnt were to: