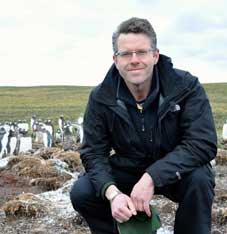 Klaus Dodds is a professor of Geopolitics at the Royal Holloway University of London. His particular interests lie in the areas of geopolitics and security, media/popular culture and the international governance of the Antarctic and the Arctic, and he has published a number of monographs and edited books including Pink Ice: Britain and the South Atlantic Empire (2002), Polar Geopolitics (2014), and a forthcoming volume with Mark Nuttall entitled Scramble for the Poles? The Contemporary Geopolitics of the Arctic and Antarctic (2015). In October 2012, Klaus Dodds was elected Fellow of the Academy of Social Sciences (FAcSS). He was Editor of The Geographical Journal (2010-2015), and is a member of the UK Arctic and Antarctic Partnership. In July 2014, he was appointed specialist adviser to the House of Lords Arctic Select Committee and a report will be forthcoming in March 2015.