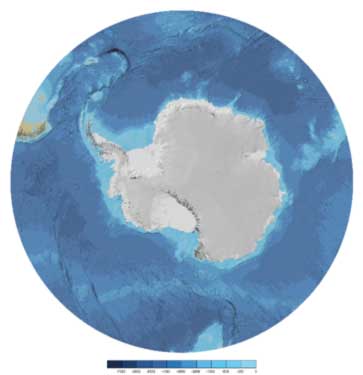 A complete and accurate representation of the sea floor is essential for navigation and a number of other disciplines. Within the scientific community alone, hydrographers, oceanographers, climatologists, biologists, geologists and geophysicists regard a detailed digital repository of bathymetric data vital to their models and predictions. Due to the remote setting of the Southern Ocean much of the area is unmapped or inaccessible and requires modern icebreaking vessels with multibeam and other systems to gather and share bathymetry data.

The International Bathymetric Chart of the Southern Ocean (IBCSO) is a sea floor topography grid built from the largest repository of bathymetric data from the southern tip of South America to the coastal waters of Antarctica. The grid is made available to the public at a 500m x 500m resolution in a Polar Stereographic projection and also incorporated into the General Bathymetric Chart of the Ocean (GEBCO).

In 2013, the IBCSO version 1.0 was released at an extent south of 60°S by the Alfred Wegener Institute, Helmholtz Centre for Polar and Marine Research (AWI) in Bremerhaven, Germany. Since 2017, the IBCSO became part of the Nippon Foundation–GEBCO Seabed 2030 project and is chaired by AWI as the Southern Ocean Regional Center. As part of Seabed 2030, the IBCSO version 2.0 is at an extent south of 50°S, an increase of 2.5 times the bathymetry area compared with IBCSO version 1.0, and is involved in implementing a sustainable infrastructure for long-term bathymetry data management. AWI is striving for the IBCSO 2.0 release as soon as possible.

The IBCSO is endorsed by international organizations such as the Intergovernmental Oceanographic Commission (IOC) of UNESCO, the International Hydrographic Organization (IHO), and the Scientific Committee on Antarctic Research (SCAR) as an Expert Group under the GeoSciences Group.