Expert Group on Antarctic Climate Change and the Environment (ACCE) 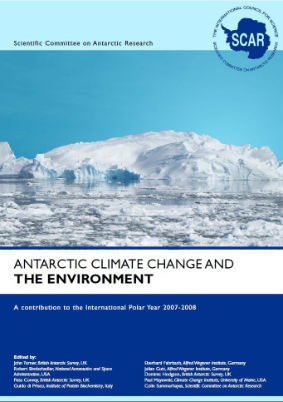 The study of Antarctica and the Southern Ocean and their role in the global Earth system has never been more important as the region is experiencing dramatic changes that have global implications.  The climatic, physical and biological properties of Antarctica and the Southern Ocean are closely coupled to other parts of the global environment by the oceans and the atmosphere.  In 2009, SCAR published the landmark pdf Antarctic Climate Change and the Environment Report. (20.02 MB)

The Expert Group on Antarctic Climate Change and the Environment acted as an umbrella for SCAR activities and produced the yearly update to the ACCE report.

The Antarctic continent and Southern Ocean are extremely important parts of the global physical/biological system, linked to the rest of the Earth in often highly non-linear ways. Research has shown that to understand how planet Earth works we need to study it increasingly as a system, and understand the lithosphere, the hydrosphere, the cryosphere, the biosphere and the atmosphere. One of the remotest parts of the Earth system is Antarctica, a continent larger than either Australia or Europe. We will not be able to fully understand how the Earth system works without comprehensive knowledge of the physical, biological, chemical and geological processes taking place within and above Antarctica and its surrounding Southern Ocean. That is a huge challenge given that these processes take place among some of the remotest and harshest environments anywhere on the Earth’s surface.

Much has been achieved in acquiring knowledge of Antarctica’s physical, biological, chemical and geological processes, especially since a network of permanent scientific stations was established for the first time on the continent during the International Geophysical Year of 1957-58. Many more results also emerged from the International Polar Year of 2007-2008.

With the increasing emphasis on cross-disciplinary Antarctic studies in the early years of this century, SCAR started a series of regular meetings that focussed of developing better links between those working in the physical and biological sciences. Out of this grew an initiative that became known as Antarctic Climate Change and the Environment (ACCE), which was seem as a southern counterpart to the Arctic Climate Impact Assessment (ACIA). The goal was to prepare a volume that reviewed our present understanding of the physical and chemical climate system of the Antarctic region, the way it varies through time, and the profound influence of that variation on life on land and in the ocean around the continent. It would also examine predictions of how the system would evolve over the next century under conditions of increasing concentrations of greenhouse gases and recovery of the ozone hole.

Inputs were obtained through a process of open consultation with the wider community in which scientists affiliated with SCAR or known to be active in climate and environmental sciences in Antarctica or the Southern Ocean were asked for text on key topics. A first draft was then circulated to the wider community for comment in June 2008. The Editorial Board then modified the text for a second round of open consultation in March 2009. Parties to the Antarctic Treaty, representatives of the Commission for the Conservation of Antarctic Marine Living Resources (CCAMLR), and representatives of the Council of Managers of National Antarctic Programmes (COMNAP) were also asked for input. Eventually over 100 scientists from various fields contributed to the volume, which was published in 2009 as Antarctic Climate Change and the Environment. They are listed alphabetically as authors of the appropriate chapters after the chapter editor.

Five hundred copies of the volume were published and distributed widely to the Antarctic community and beyond. In addition, individual downloadable chapters were made available on the SCAR website, so as to encourage its widespread use as a research and teaching resource. The volume was a contribution to the International Polar Year 2007-2008 and to the goals of the World Climate Research Programme (WCRP), and in particular to its Climate and Cryosphere programme (CliC), of which SCAR is a co-sponsor. It was also made available to attendees at the meeting of the UN Framework Convention on Climate Change in Copenhagen in December 2009, and subsequently to the Intergovernmental Panel on Climate Change. Brief, annual updates on advances in Antarctic climate-related science were also provided to the Antarctic Treaty Consultative Meetings. However, Antarctic science is advancing very rapidly with important papers regularly being reported in the popular press. It was therefore felt that a revision to the original ACCE volume would be appropriate. But rather than produce another hardcopy book it was decided to convert the original material into a wiki so as to make it easier to revise the text.

The preparation of the ACCE wiki was carried out by Mr Tony Phillips and Mr Guy Phillips using the open source Mediawiki software. We are grateful to the British Antarctic Survey for hosting the wiki.

The Terms of Reference of the group were to:

The original report and all updates can be found on the ACCE Report page in the SCAR Library.